It seems each year more and more NHL games are facing blackouts for cord cutters. This mostly applies to “in-market” games using NHL.TV or Rogers NHL Gamecenter (depending if you live in the US or Canada). The NHL defines “in-market” games as those which are broadcast by a regional television provider in your area. “Out-of-market” games can be streamed with no problem. For example, if you’re a Montreal or Ottawa fan living in Atlantic Canada, you won’t have much luck. But if you’re a Canucks fan, you’ll be able to stream every game.

I went years without a cable subscription watching my favorite team when regional broadcasts were available on television. It wasn’t until the 2014/15 season when blackouts started affecting my NHL Gamecenter streaming. Fast-forward to 2016/17 and it appears most games will be blacked out unless I have a cable subscription.

Rogers and the NHL have a website which displays whether a game is blacked out or not. Canadians can use Rogers’ Where to watch tool to determine blacked out games while Americans can refer to the NHLTV Blackout Detector.

But the tools are not always useful.

It seems the NHL’s location detection algorithm is flaky at best. National broadcasts have been frustratingly blacked out while I’ve been able to successfully watch a regional broadcast when blackouts should have clearly applied (according to the Where to Watch tool). I’ve tried contacting Rogers, the NHL, and my internet service provider about the incorrect black outs but have made absolutely no progress. Rogers asked me to contact the NHL while the NHL asked me to contact Sportsnet who then asked me to contact Rogers. Frustrating.

Cord cutters can still avoid cable though. I’ve found an inexpensive workaround by leveraging a VPN. I’ll be honest, VPN’s kind of scare me. I’ve always thought VPN services were secretly tracking your browsing habits and reselling your internet connection. And I’m not necessarily wrong. But I did a little research and found TunnelBear. TunnelBear was the first public VPN service to complete multiple third-party security audits. They confidently state they do not sell personal information, browsing data, or sell your bandwidth. They offer a free account with a bit of included data and the option to Tweet their Twitter account for more free data. I gave the free trial a shot and sent a Tweet for another 1GB. Moments later I was streaming the “in-market” NHL game. It works by routing internet connections through another part of Canada or the United States. No connectivity or quality issues to report. It works on Windows, Mac, iOS, and Android. 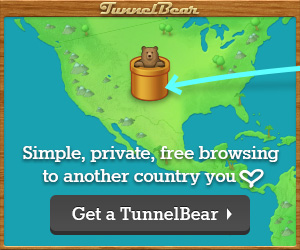